Sophomore Emma Shiers served up a team-high eight aces in the 25-16, 25-19, 25-23 match, and also had 10 digs and two kills. Juniors Emma Falk and Audrey Richard each had nine kills and an ace apiece, while senior Mackenzie Fidelak had eight kills, two blocks, and 13 assists. Junior Madison Schoeder, a transfer student who is now eligible to compete for the Cougars under CHSAA rules, had an ace and nine kills in two sets.

Junior Zoe Gonzales asserted herself on offense once again, with a season-high eight kills in the contest. After the game, Gonzales credited her teammates’ hard work both for her big night on offense and for the dominating performance against their arch-rival.

“We really came together as a team tonight, and all of our kills were so on point,” said the middle hitter, who also had two blocks in the match. “Everyone just did their job.”

“That’s definitely a team effort right there,” said the middle hitter of her growing offensive presence. Over her last three matches, she has averaged more than two kills per set, bringing her season average to 1.6, up from 0.8 in 2016. “I wouldn’t be able to do that without our passers and setters in the back row. Our new setter who just came in, Madison, she did great tonight.”

“We knew their front line was going to be a little weaker, so we honed in on Rylee and tried to shut her down,” Agho said after the win. “I think we were able to do that with our block. Our blocking was phenomenal tonight…Anytime we have that kind of movement at the net; it’s going to be hard to get through us.”

Agho was also pleased with the improvements she saw in the Cougar defense against the Raptors.

“I made a switch-up in the defensive back row, and they played very well tonight.” she said. “Communication was a little bit better. Passing was on so we could actually run an offense.”

The Cougars extended their season winning streak to nine games two nights later against Northridge at home. Gonzales and Richard led Niwot’s attack with six kills apiece. Falk had five of the team’s 11 blocks on the night, while Fidelak had 12 digs and four kills.

With the wins, Niwot’s Northern League unbeaten streak grew to 27 matches, going back to 2015. The Cougars improved to 13-1 on the season, and are currently ranked third in the CHSAA weekly poll and second in the RPI for Class 4A. 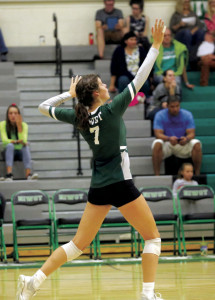