With a week to think it over, Niwot head soccer coach Stephen Dimit admitted that there was a silver lining in last week’s double-overtime loss to Centaurus after all.

“We learned a lot from the overtime game on Thursday,” he said, after his team’s 4-1 victory over Thompson Valley on Oct 12. Earlier in the week, Niwot avenged a tough 1-0 loss to second-ranked Silver Creek last year by handing the Raptors their first loss of the 2017 season on an overtime goal by Manny Tapia.. “So we knew what to do a little bit better when it came down to overtime on Tuesday. We focused on defending, keeping the ball, and Manny’s effort at the end was just spectacular.”

Senior forward Jason Rodriguez got the Cougars on the board early against the Raptors with his ninth goal of the season, but Silver Creek tied it up with less than 10 minutes to go in the half. With the game tied 1-1 in the seventh minute of the first extra period, Tapia chased down a long pass and then snuck the ball past Silver Creek goalie Brandon Coder for the game-winning goal. Coming on the heels of the first loss of the season, Dimit said the team knew the match against the league’s first-place team was a must win. “The guys really wanted this one.”

Two days later, Niwot cemented its hold on second place in the Northern League with a 4-1 win over the troublesome Thompson Valley Eagles, whose shoot-first-ask-questions-later offense had keeper Mario Munoz and the Cougars’ defense hopping.

Niwot senior Cameron Carlson put the Cougars on the board early with his first career goal, a high shot over the goalie’s head to the far post, following a crossing pass from Tapia. Twenty minutes later, the midfielder had his second of the game in nearly identical fashion, putting Niwot up 2-0 going into halftime.

“It was really good to see him get not one, but two goals,” Dimit said. “He had a great start for us.”

“I’m not the quickest out there, so I just sat back there and waited for the ball to come to me rather than run after them,” Carlson said following his first multiple-point game. “The first one came across and none of their players stepped to it, so I just finished it. The second one, our player was down in the corner, and I just asked for a drop and I just shot it.”

Tapia extended the Cougar lead with another two goals in the second half, bringing his team-leading total to 11. He also picked up his fourth assist. Senior Andreas Montealegre got his eighth assist on the year, extending his scoring streak to four games, while senior Nicholas Grant picked up his third assist this season, and senior transfer Seidon Nemeth from the US Virgin Islands had his first assist of the season.. Also seeing significant playing time for the Cougars were freshman Aidan Martin and sophomores Austin Borncamp and Emrick Wells.

Though Niwot has the best overall record at 11-1-1, Centaurus remained atop the Northern League standings with a 5-0-1 conference record. Silver Creek fell to third place, after a loss to Northridge on Oct. 12. The Cougars are second in the most recent RPI rankings, four places ahead of the Raptors in sixth and seven ahead of Centaurus. In the most recent CHSAA weekly poll, the Cougars were ranked fourth in Class 4A. 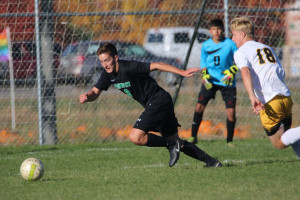